The Ford Essex V6 engine was a 90° V6 engine family built by Ford Motor Company at the Essex Engine Plant in Windsor, Ontario, Canada. Unlike the British Essex V6, the Canadian Essex used a 90° Vee configuration, in addition to having different displacements and valvetrain. This engine was succeeded by the Ford Duratec 35, and the last one produced was found in 2008 F-150 (regular cab only).

The Canadian Essex is an overhead valve (OHV, or pushrod) design featuring aluminum heads, which reduced its weight considerably and made it a very powerful engine for its size. The engine was initially offered in only a 3.8-liter displacement, being used in a variety of subcompact through large cars, minivans, and some pickup trucks. A 4.2-liter version was introduced in the mid-1990s for use in the F-150 and Ford E-Series, later, the Freestar and Monterey.

The 3.8–liter V6 was replaced by a 3.9 L version in 2004, though changes were minimal. The Essex and the smaller Vulcan V6 were the last traditional overhead valve engines built by Ford until 2019.

The Canadian Essex’s origins are somewhat controversial. A common, but erroneous, belief is that the Essex was based on the 5.0 L OHV V8 engine with 2 cylinders missing, because they both have a 90° vee configuration, are OHV, and that a 5.0 L V8 less two cylinders would make a V6 displacing around 3.8 liters.

Though the practice of deriving a V6 from a V8 was not unheard of, several important differences between the small block’s design and the Essex’s, such as their considerably different bore and stroke, made a common design lineage implausible. It is also important to note that the RWD version incorporated the same bell housing as the 5.0 liter small block V8 engine while the FWD version did not.

Often the RWD engines are referred to as small blocks since the transmission mounting flange is the same as the family of small block V8 engines.

One source states that the Essex is instead a reverse engineered Buick V6 engine. Toward the end of the 1970s, Ford needed a new six-cylinder engine that was powerful and compact enough to be used in a mid-size car while meeting increasingly stricter emissions and fuel efficiency standards.

As Ford needed to develop a new engine, as none of their existing could be readily made to meet the new requirements, one needed to be developed. The quickest and least expensive approach in accomplishing this was to copy an existing engine from a competitor, which ended up being the Buick V6 from General Motors. Ford’s resulting V6 was very similar to that of the original Buick engine — down to an unusual external oil pump design that was common in Buick engines and without precedent in modern Fords — and had a nearly identical displacement. In fact, one of the only major differences between the two engines early on was Ford’s use of aluminum heads as opposed to the cast-iron ones used in the original Buick design. However, in the years since the Essex V6’s debut, design revisions from both Ford and GM to their respective V6 designs have differentiated their engines from each other to a point that any relationship between the two designs is not as obvious as it once was.

Ford’s 1982-83 published report to the Society of Automotive Engineers gives a full history of clean-sheet design targets and unhurried development. This account candidly details problems emerging during the preparation of 500+ prototype engines, and even with the first 5000 production engines. The latter had to be dismantled, with internal components then re-assembled into newly-cast blocks incorporating revisions for strengthening. This detailed report lays to rest speculation about the 3.8 engine’s derivation from other Ford or GM designs.[4]

Ford engineers Armstrong and Stirrat described a design process initiated in 1977, with first prototypes running in 1978:

In 1977 Ford planners projected the need for a lightweight, compact, V6 engine as a replacement for the base V8 engine in the mid-size cars and light pick-up trucks of the 1980’s. The prime objectives were light weight, excellent fuel economy and reliability. The initial design called for the maximum use of lightweight components, including die cast aluminum block and single plane intake manifold and aluminum semi-permanent mold cylinder heads. The 90 degree bank angle was chosen to provide minimum length and height, lowest weight and a wide intake manifold which would provide runner design flexibility for optimum cylinder to cylinder fuel/air distribution.

The essay noted that a cored crankshaft, stamped steel exhaust manifolds, and harmonic balancer and camshaft sprocket cast in aluminum were “lightweight features…deleted because of cost or other manufacturing problems.” The switch to a cast-iron block was due to production costs, and not reliability concerns.

Output of the supercharged V6 was increased to 230 hp (172 kW) at 4400 rpm and 330 lb⋅ft (447 N⋅m) of torque at 2500 rpm for the 1994 and 1995 Super Coupe. To accomplish this, the engine’s Eaton M90 roots-type supercharger was given a larger, square-style inlet, a larger attaching inlet plenum, and Teflon coated rotors. Additionally, the engine received larger fuel injectors and an increase in compression to 8.6:1.

A 3.8 L (3,797 cc) V6 with split port cylinder heads was introduced in the 1996 Ford Windstar along with a variable length intake manifold and intake manifold runner control (IMRC) in the six shorter runners. This engine was rated at 200 hp (149 kW) at 5000 rpm and 230 lb⋅ft (312 N⋅m) of torque at 3000 rpm. The upper intake manifold has a sticker denoting “Split Port Induction” located on the passenger side of the forward plenum. 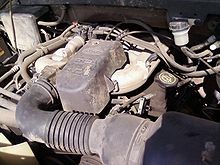 Ford experienced problems with this engine for the 1997 and 1998 model years. These included issuing all 1997-1998 engines made at the Essex Canadian plant with a bad front cover gasket. The lower-intake manifold had a bad reputation for cracking at relatively low miles. Ford resolved this problem by using a thicker gasket for 1999 model year, and 5 years later in 2004, it was modified again with a redesigned gasket that later became “industrial” certified as ESG-642 for Ford Power Products. It also served as a new and improved base engine for 2005+ F-150 regular-cabs.